A controversial public art piece has found a permanent home with a St. George business. The giant spider sculpture formerly displayed on Main Street will now serve as mascot for a pest control company. 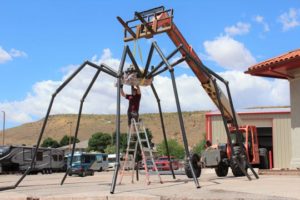 Local arachnophobes may be relieved the sculpture no longer inhabits the Main Street traffic circle but according to its creator, it had a devoted group of fans. “This is the very first piece in the 12 years that I’ve done Art Around the Corner, that I had people show up, set out chairs, take pictures while I was taking it down because they were going to miss it,” said artist Deveren Farley. “I had people asking for autographs.”

Fans of the eight-legged wonder can visit their friend at its new home in front of Morgan Pest Control on Hilton Drive. “It’s an iconic thing for St. George,” said Dave Kipp, owner of the exterminator service. “We’re tickled to keep it here.” Kipp and others assisted Farley Wednesday morning as he reassembled the sculpture in its new location. 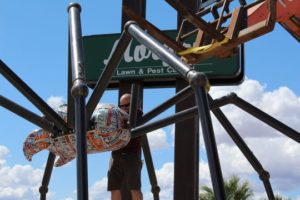 When Kipp opened the shop four years ago, he wanted a giant scorpion to top his business sign but cost and engineering considerations made that unworkable. Kipp’s quest for a grand insect ended when he and his crew saw the spider go up last year during the annual outdoor art exhibit.

“Utah license plates all over the head, the stop sign under the belly for the black widow, it’s just perfect,” he said. Kipp’s okay with bugs and crawly critters but Farley admits it was the screams and shudders his other, smaller spiders received that inspired him to create the monster. Farley said that his inspiration for “Giant Spider” came from the customer reactions he got when he displayed his works at a fall craft show. “People would come by my booth and they’d see all the spiders and they’d get scared,” he said. “And I’m like, they’re fake. It’s ok.”

Coincidentally, his application for Art Around the Corner was due about the same time. “I thought, honestly how funny would it be to do a giant spider and see if people were scared by it or not,” he said. The sculpture has evoked strong responses from both sides. When the exhibit ended in April, Farley found his spider had more than one suitor. Morgan Pest Control and The Fiesta Fun Center both expressed interest in making the work their own.

“Art is to bring out emotion in people and seeing all the emotion that this guy brought out, that’s why when two companies wanted it, instead of making them have a bidding war, I thought a better option would be just to make another,” Farley said. Once the installation was complete, Farley headed to the entertainment venue to take measurements for a second behemoth set to straddle the mini-golf course. He said the new sculpture will be about the same size as the original. “Giant Spider” stands 17-feet tall and has a circumference of about 22 feet. Each leg weighs about 220 pounds. The head and body are hollow and are made of galvanized steel and Utah license plates. Total weight is just about a ton. Once the new spider is in place, Farley will have a total of six sculptures on permanent display in and around St. George.

Farley’s entry in this year’s exhibit is already sold. The City of St. George announced it would purchase “Power” a 12-foot long snake sculpture currently on display at Town Square and destined to impress visitors to Snake Hollow Bike Park next year. “I guess it just fits perfect there.” The work is also composed of license plates. Farley has a special source for them. The Salt Lake City evidence department hands over a variety of metal objects collected from crime scenes. “So, every license plate on that has been stolen,” he said.

Are you interested in learning more about sharing your art with Art Around the Corner?  We welcome new artists to our show every year and would love to consider your art.  Please send us your information in the form below:

Have questions about a
piece of artwork?

We would love to give you more information! Fill out the form below and we will get back to you shortly.